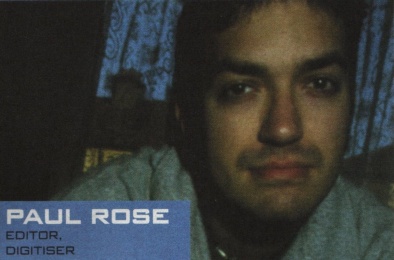 Brain In A Jar

In these days of Internet-this and online-that, it's easy to forget that millions of people have long had access to a digital information system - good old Teletext, fitted as standard to the majority of television sets. And, perhaps surprisingly to a few of you, videogames have a plave in Teletext's world.

Currently residing on page 480 of Channel 4's service, Digitiser is a humorous blend of game news, reviews, previews and oddness. Regulars include Phoning Honey, who makes prank calls to unsuspecting game shops, and Gossi the Dog who rounds up all the latest gaming rumours. The man behind it all is 28-year-old Paul Rose, who's been running Digitiser since '93.

"I was originally employed by Teletext as a graphic designer," he reminisces, "having previously worked on the scoreboard animations at Wembley Stadium. At the time Teletext had yet to go on air, and I knew that a single page games magazine was being planned. As the console scene was just starting to take off - this being around the time of Sonic 2 - I put together a proposal for something a little grander, and was astonished when I was told to go away and write the thing. Which I ended up doing, alongside another member of staff [Mr Hairs, Tim Moore]. One who had some writing experience, mercifully."

Since then Digitiser has become a massive success with around 800,000 viewers each week, plus an Internet site (www.teletext.co.uk/digi). There's more to come, too, as Paul explains, "The possibilities offered by Digital Teletext are immense. Obviously, we'll be able to feature screenshots soon, which will no doubt go some way to improving our relations with image-snob PR people." He smiles and adds, "We've always existed at the fringe of the games scene, and it allows us to view things from the perspective of outsiders."

Paul's various other projects include a movie script for Sky Pictures ('A horrific experience'), and http://www.bubblegun.com/, "which is a vague attempt to apply a Digitiser-like style to the wider world of entertainment. It's getting in excess of 70,000 hits every week, but we've yet to make any money out of it. If anyone has any ideas though, we're open to offers. Preferably monetary offers."

"It's the closest thing there is to a bar-fight simulator. Power Stone's a proper 3D fighting game, yet it avoids many of the pitfalls that 3D often presents. It may lack the depth of some beat 'em ups, but you can't argue with throwing chairs at people, can you?"

"I love Soul Calibur not so much for the graphics, or even the gameplay, but for all the little extras that Namco has hidden in there. Playing the game is like going on some mad voyage of discovery."

"I have to say that this was the first Dreamcast game that truly blew me away. The graphics are just truly immense, and the ruined New York course is quite simply a work of genius."

"Providing you're intelligent enough to look beyond the simple graphics, Worms is one of the best multiplayer games ever made. It proves that at the end of the day, great gameplay wins out."

"I'm a big fan of Judge Dredd [from comic book 2000AD], and TrickStyle is so clearly inspired by the comic strip's powerboard races that I couldn't not include it in my favourite Dreamcast games list."